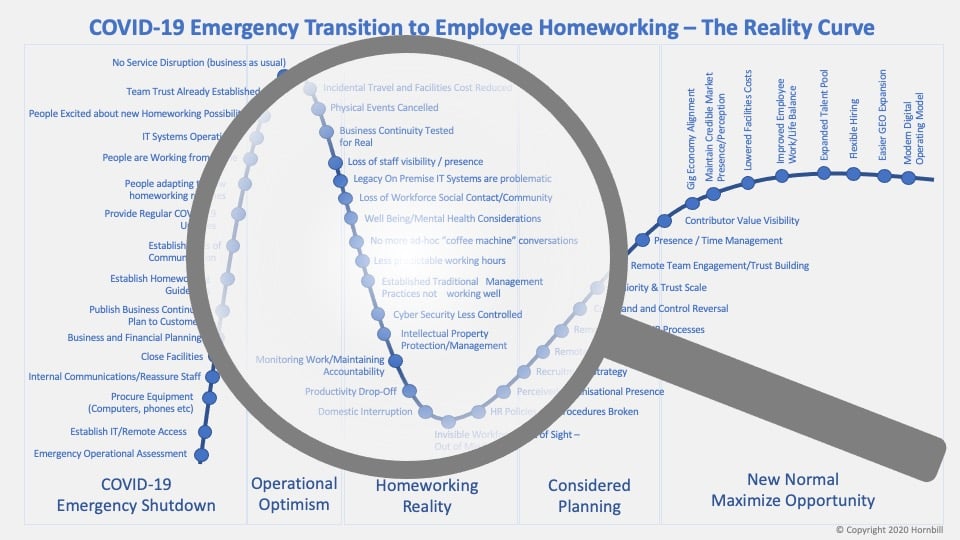 Remote Working Part 2: – The “New Normal” is unlikely to happen for most organizations!

In Part 1, I introduced the idea that Remote Working seems simple, and this could be the new normal for many organizations who have a workforce made up of knowledge workers.  When the lockdown for COVID-19 kicked in, all businesses had to adapt and quickly.

There was no time to plan, it just had to happen. Of course, for some businesses this was catastrophic because it meant an immediate end to trading.  For other companies, like Hornbill, we are fortunate that our workforce, with the aid of a computer and internet access, is able to work from home almost as effectively as being in the office.

Our story is one mostly of a “non-event”, the government announced that people should work from home, we instructed our workforce and that was that.

Pretty much everything we use is either in the cloud or already accessible via VPN and people in the company largely already had the ability to “work from home”, so when the instruction was given, it just happened.

Immediately, there was a general feeling of success, we did it, we done the thing we never planned to do, everyone was working from home, and I think like many other companies we probably gained an instant belief that working from home could easily be the new normal.

At that point, it is very easy to focus on the benefits, the potential cost savings, the improved work/life balance, the removal of commute times and the congestion and forced social proximity on crowded transport systems.  Where is the downside?

When I really started to think about what remote working means, it became apparent to me that its possibly not as simple as the initial outcome might suggest.

I created The Reality Curve above to try and map out some of the key points that I considered, and how these fit into the phases of a transition to a remote working model, and that’s the key point, it is a business transition. There should be no surprise that there is a big dip in optimism levels once the initial transition has happened, if you choose to ignore this I am sure it will lead to a lot of issues later on.

The fundamental problems are organizational, with the dependency on traditional management practices, as well as employee expectations, this becomes very problematic.

Traditional management practices centre around a “place of work”, everything from the Employee Handbook to employee value assessments are based around very traditional approaches, rooted in the command-and-control structures established in the early years of the industrial revolution.

As a business, when we employ someone, we are making an investment, and through various means, the business measures value back for that investment over time. The reason why I make this specific point, is people are an “ongoing” investment, the biggest single investment almost all businesses make. Its important to always measure the return on any investment, and because these investments are ongoing we need to look very carefully at exactly how this is measured.

For some roles it is easy to measure, for example, salespeople, who are typically targeted on revenue from deals they work and close, and this is measured quite stringently. It is remarkably easy to make judgments about the ROI for this type of role, it is also remarkably simple (by comparison to other roles) to set required performance levels.

For many other roles though, that’s not the case, often people are measured by other, softer, more human measures. Like “Bill is always on the case when there is a problem” or “Jane always does a great job organising events” and so on.

It is these softer measures where the office base is the cornerstone to this measurement, people “in the office” are present, visible and stands out to other people who are team players and who are not, who does good work and who does not, which is all great subliminal input for a manager who is responsible for those people. One of the first indications that someone is not pulling their weight is often when they turn up late/go home early, its visible to their manager, their team mates and other people in the company.

Aside from presence, an office environment creates a “vibe”, and from that vibe, culture is built.  Team culture is terribly important in all businesses, the right culture is a critical component to what makes a company succeed.

I like to think of culture as a “community of people aiming for the same goal”, and in that community, the most important thing that happens is, people build trust between each other.

When team Hornbill went home on March 23rd, we left the office, but that culture, that established trust and those relationships were already forged, and that is the key reason why the transition to home-working was so easy to achieve.

It was not the technology, or our organizational structure or our collaboration and business tools all in the cloud, those things helped of course, but it was really the trust and relationships within the established team that made it work. The real problems I believe start forward of this initial success.

When onboarding new team members, traditionally, we have an office base, and this is the cornerstone to our onboarding process – everything we do is geared up in this way, new members are trained “on the job”, they get to sit with, observe and work with their co-workers, and managers rely really heavily on this “learn on the job” approach to get people settled in, up to speed, and productive. While they are learning, they also start forging relationships and building trust.

Like many cloud companies, we have remote teams and workers in our domestic market (UK) as well as internationally (in our case North America, Australia and Europe) but most of these people, when first employed, worked out of our main offices, we have not so far had the need to recruit people who are remote workers from day one.

So I started to think about what it would be like if we did not have an office base at all, and the majority of our workforce were remote working. If we were hiring new people,  who were all going to be remote workers from day one, how would this work?

That’s where it becomes apparent to me that the way we currently do it will simply not work. In fact, I expect that hiring would become far more difficult and more risky, with a higher likelihood of failure, and this creates a problem as we try to scale, or even replace people who we might just lose through natural attrition. It is a compelling question for me as despite wider market maelstroms, we are winning business, we are growing and we are actively hiring even in the midst of the COVID-19 lockdown. 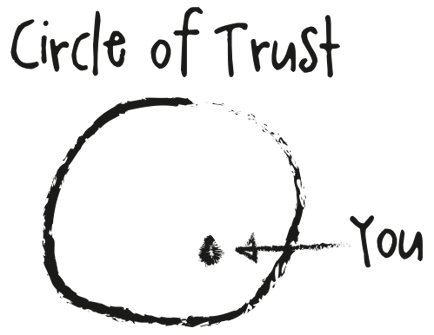 The lack of an office would also mean less face-to-face interactions, fewer observations and so on.  What happens to that trust that was once built through these interactions, how long before it dissipates and how do new employees “learn on the job” and get the opportunity to build relationships and join that same circle of trust.

All of these issues start to paint a very different picture. I have listed a whole bunch of things along the downslope of The Reality Curve infographic at the top of this article.

When you consider all these points, you have to conclude that there is a large amount of organizational change to do if you are going to be successful at transitioning from an office base to a remote working model.

I would propose its likely the effort and buy-in required from all levels of the organization, and the difficulties that will need to be overcome, might just be large enough to leave you wanting to just get back to “the old normal” as quickly as possible, something I expect will be the reality for many organizations asking themselves these same questions.

If you’re brave, and forward-looking, you might see this as an opportunity for organizational change and go for it.

If you want to make this change, it’s also worth noting that this is a time-limited opportunity, the threat of COVID-19 second spike, or future coronaviruses are compelling time-bound events, but most importantly, as of today, you do have a team who have pre-existing relationships and trust already established, they probably do have the motivation to make home-working work for them which is on your side.

You will need your peoples absolute commitment to forge a new culture, a new operating model and new ways of working, if your people are willing to make the change, and adopt a whole new way of working, then I believe you have the opportunity of a lifetime to transform your organization and gain many benefits that such a transition to remote working could bring.

For me at Hornbill, I am still undecided to be honest.  Much of the decision really depends on how the team at Hornbill ultimately feel about the changes that would be required to make it work.

In the next article, I am going to get into some detail behind the key organizational and management practices that I believe will have to change for Hornbill, and what those changes might look like.

Please subscribe to the blog using the button above for future updates, and please feel free to comment below and let me know what you think…